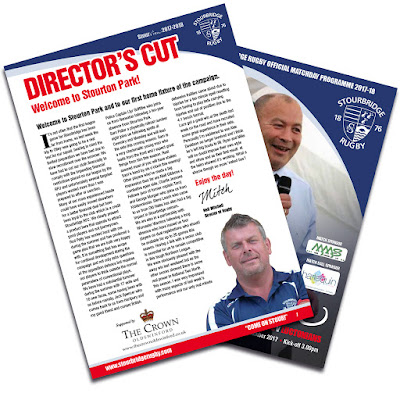 Welcome to Stourton Park and to our ﬁrst home ﬁxture of the campaign.

It’s not often that the first league game for Stourbridge has been far from home, so last week the trip to Otley was going to be a real test for our squad, bearing in mind the limited preparation we have had due to slow recruitment over the summer. We have had to cut our cloth financially to comply with the impending financial restrictions placed on our league by the RFU and unfortunately several targeted players wanted more than I was prepared to offer or sanction.

Many of our more experienced heads could have easily moved elsewhere for a better financial deal but have been loyal to the club which is a credit Stourbridge RFC. We clearly present a product here that appeals to attract good players and not journeymen. Rod Petty has worked hard with me during the summer and has produced a game plan that we are both very happy with. It is something that has scope for continual development during the campaign and not only asks questions of the opposition defence but requires our players to think outside the normal parameters of conventional plays. We have had a substantial turnover during the summer with 17 exits and 16 new faces, some having been with us before namely, Jack Spencer who comes back to us from Hartpury and my good friend and current British Police Captain Llyr Griffiths who joins us from Nuneaton following a ten-year absence from Stourton Park.

Sam Pailor a physically robust number eight joins us following spells at Coventry and Moseley and will lead the side this coming season. Sam is a very charismatic young man who leads from the front and I expect great things from him this season. Rest assured most of you will have shaken Sam’s hand by six o’clock this evening! Other players who’ve made a big impression thus far are Niall Gibbons a combative open side, Charlie Jeavons Fellows (son of former captain Tom) and George Morgan who joins us from Kidderminster. Steve Leach who came to us from Old Hales has also had a big impact in Stourbridge colours.

We are also in a partnership with Worcester Warriors following a long absence who have loaned us four players on dual registrations who should be available for up to 20 games this season. Having a link with a senior club is essential for us to remain competitive in this tough Northern League.

We were obviously pleased with the away win last weekend but as the other scores showed there is some real power in National Two North this season. I was very impressed with many aspects of last week’s performance and our only real minute defensive frailties came about due to injuries for a ten minute spell resulting from having to play lads carrying injuries and out of position due to the 4:1 bench format.

Lucs got a great win at the death last week on the road and have recruited some great experience in their side. Personally I’m saddened to see Alex Davidson no longer involved and I think he’s left big boots to fill. Ryan and Mike will no doubt impose their own style and ethos and as their first result  at the helm showed it’s working. What a shame though no more ‘naked bus’! 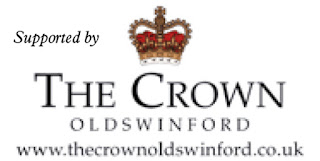 Posted by Stourbridge Rugby at 10:07