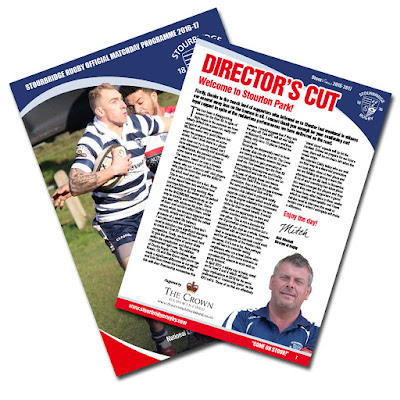 Firstly, thanks to the coach load of supporters who followed us to Chester last weekend to witness our second away loss on the bounce to nil. I cannot thank you enough for your continuing and loyal support in spite of the rudderless performances we have delivered on the road.

This has been a disappointing season for the First XV. In spite of high hopes in the summer we have latterly drifted into a poor run, sadly not untypical of previous seasons.

We have some very good players but when the pressure comes on some choke. I don’t think there is a player who does not try in my squad, but I have witnessed recently and specifically at Wharfedale, the passion shown in some teams we simply can’t match. The reason, based on over a decade of experience is a core of lads in some teams who are ‘acorn to oak’ club players who play for more than just the dollar in the wind, mud and rain.

This is not a criticism but a fact. Many of our squad have two and three hour journeys following long working days and invariably in the winter end up parked on the M42/M5/M6 respectively on the way to training and match days. Some can deal with whatever life puts in front of them and not let it affect them, whilst others which has become apparent more recently, simply can’t deal with the added pressure of a work life balance.

I am pleased with the squad I have but I need to introduce two significant elements to make the First XV more efficient and competitive. Firstly, we have to work hard to gain the partnerships of senior clubs within the conurbation and that is being implemented right now. The addition of Charlie Hayter, Charlie Fellows, Matt Kvesic, Oli and Alex Grove eight years ago made a significant difference to our squad and Sale have shown the benefits of the link with their Premiership namesakes this season. I would suggest that if they win the play off, Sale FC will sit mid table in National One next season and thus sitting only circa 15 places behind the Senior side.

Secondly we desperately need to have a feeder club into the First XV. The Lions are having a fantastic season this year and look likely to gain promotion to level six. Five seasons ago the First XV were playing Bromsgrove and Dudley Kingswinford and now the Lions are on the cusp of playing these two teams at Stourton Park! If the Lions do attain promotion, then it brings the gap between the semi professional club and the amateur club (albeit in principle totally separate clubs) closer which would allow to some degree relatively free movement for the first time ever between the two clubs for their mutual benefit. It would also allow an opportunity to train and utilise coaches under one umbrella, one ethos. This is not a decision for me if promotion comes to fruition but a decision for the club as a whole, however combined with an input from a senior level to ourselves the cascade could work well for all aspects of the mother club. However, if it’s not to be, then perhaps we will have to consider asking neighbours who are a level below who are encountering the same scenario as ourselves this season to work with us going forward.

In April 2017 a salary cap is being voted on for level 3 and 4 which will have huge implications in 2018 for the semi-professional or ‘community game’ as the RFU call it. Those of us that are effectively ‘stand alone’ squads will be hit the hardest. Unless we prepare for our future now, there will be no chairs left when the music stops.

We entertain Caldy today who are well on their way to a deserved promotion, we took them close at their place and we are fielding as strong a team this afternoon as we did back in November. A lot of soul searching has taken place this week amongst the players and they know they owe our supporters a game. We have been nilled twice in three weeks which is totally unacceptable and I have felt the need to intervene this week in certain area’s which I anticipate will make a difference.

Posted by Stourbridge Rugby at 07:14 No comments:

Getting Social at Stourbridge Rugby 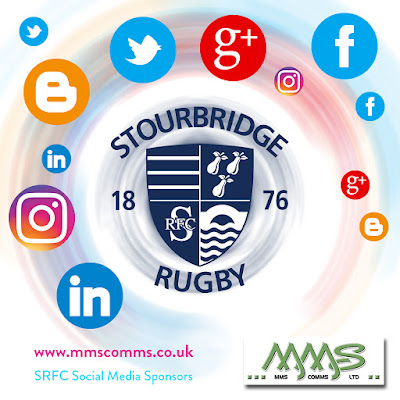 Social Media now plays a very import role in the way that every section of Stourbridge Rugby communicates both internally and with the outside world.

It's a fantastic medium for advertising forthcoming events, as well as letting everyone know how our teams are performing, news from one our social events, or engaging with Club Members and Supporters.

These are our current social media channels:

If you would like to receive our weekly e-mail news - In Touch, please e-mail Mark Denison on markjpd@icloud.com to be added to the e-mail list.

PLEASE NOTE: Stourbridge Rugby Football Club has a Social Media Policy that can be downloaded from the documents section of the website if you login as a club member. It is important that when engaging with any of our social media channels, you strictly adhere to that policy.

Posted by Stourbridge Rugby at 05:20 No comments: