Notes from the President - Luctonians Game 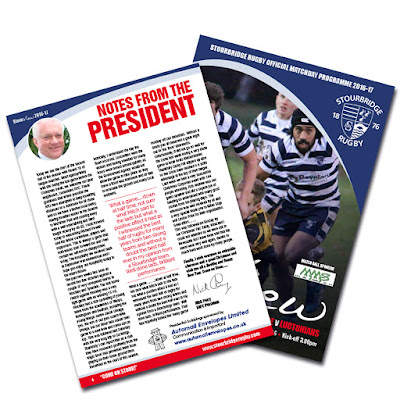 Today we see the start of the second half of the season with Round 16 of league matches. Most appropriately with this being the last game before the Christmas break, we welcome our dear neighbours, Luctonians RFC. Thank goodness that where possible the RFU have attempted to keep travelling distances to a minimum for all clubs and so we have a festive local derby.

Having travelled earlier in the Season to Mortimer Park and coming away with a well entertaining and hard fought victory by 49-32, I look forward today to welcoming Richard Powell and his fellow committee, players and supporters. This is always a game that both teams look forward too and I feel certain we will not be disappointed today. The hospitality we received back in September was tremendous and I hope you enjoy our hospitality today in the return fixture.

The past two weeks has seen us record two fine victories against a couple of very competent teams in Hinckley and Tynedale. The last home match against Hinckley was a very tight game with us winning 15-10. Hinckley had a rich sprinkling of young talent from the academies of Wasps, Nottingham and Bedford, including the young Wasps centre Jacob Umaga, yes, the son of our past coach Mike Umaga, but our Stour lads raised their game to a new level and came out on top. This was followed last Saturday with the very long trip to Corbridge. Thankfully I can report that as a club they have recovered positively from the tragic flood that prevented them from playing on their home ground from December to the start of this season.

Ironically, I understand the day the flood occurred, Luctonians were the visitors and having travelled for many hours were turned around quickly as the Environment Agency would not allow the game to take place as they knew a flood was imminent and all had to evacuate the ground and many local residents.

What a game……..down at half time, not sure what Mitch said to the lads but what a positive effect it had as I witnessed the best half of rugby for many years from two strong teams and without a doubt the best half ever in my opinion from a Stourbridge team. Well done lads, brilliant performance. That has hopefully kicked the ‘away game’ monkey off our shoulders. Without a doubt you all deserved a great night out in ‘the Toon’ afterwards. Unfortunately, it did not go so well for the Lions last week losing a very close game to local rivals Kidderminster. Thankfully Camp Hill slipped up also so the Lions have retained a 5 point advantage at the top of their league.

Last week we held a very successful Christmas Corporate event with 144 people attending. Rob Andrew was our guest speaker and did a superb job of keeping us entertained with many good stories from his playing days. The afternoon was well received by all and a very special thank you to Miles Edge and Louise Price for their organisation.

This was followed on Sunday by our Christmas Fayre. Sadly, Nikki and I could not attended as we were still in Newcastle but I have been told that the event went very well again, thanks to much hard work done by many people.

Finally, I wish everyone an enjoyable afternoon and a great Christmas and wish you all a Healthy and Happy New Year. Come on Stour......

'Notes from the President' sponsored by
Automail Envelopes Limited
Communication is important
http://websales.automailenvelopes.co.uk/storefront/home
Posted by Stourbridge Rugby at 05:43 No comments: 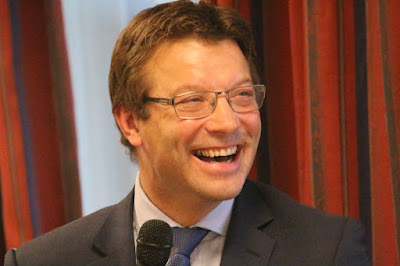 The lunch was a complete sell out, the main Club Room packed with members and their guests. We were treated to a delicious four course festive meal, great company and an excellent after-dinner speech.

Rob had his audience entertained from the start, using his friendship with some Stourbridge stalwarts to kick things off. His recollections of his career (and that of Jonny Wilkinson) were humorous and interesting, holding everyone's attention through to the end.

Club President, Nick Perry, also made some announcements about the May Corporate Lunch, which will be held on Friday 5th May 2017 - more details will follow soon. If you would like any more information about the May Lunch, please call 01384 395000.

Our thanks to Nigel Price, who sponsored and MC'd the lunch. 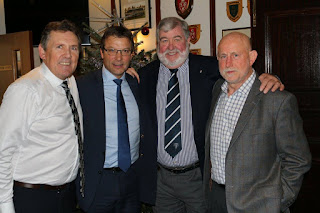 Posted by Stourbridge Rugby at 02:30 No comments: 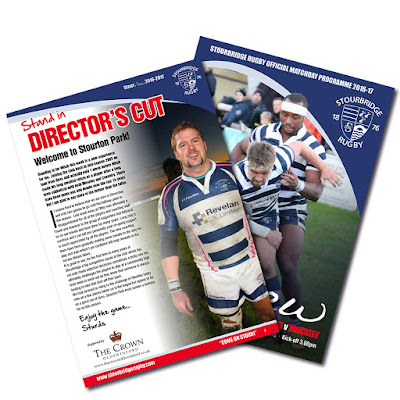 This is the 'Stand In' Director's Cut from the Hinckley StourView on Saturday 3rd December 2016 from Adam Sturdy...

Standing in for Mitch this week is a new experience for me. Joining the Club back in mid-season 2002 on loan from Bees and actually only 1 week before Mitch made his long awaited return as a player after a long term sabbatical with both Moseley and Coventry. There have been many ups and downs over the last 14 years but I am glad to say more of the former than the latter.

It seems hard to believe that we are now in December and only two games to go until the halfway point in the season.  Last week away at Otley was ultimately a disappointment for all of the players and coaching staff.

Thank you however to the group of supporters that followed us on our travels and have done for many years. Long may it continue and I can tell you personally your on-going support is much appreciated by all the players. The new coaching team have been gradually making some tweaks to the way we play and train which I am conﬁdent will reap rewards in the not too distant future.

It is great to see, for the ﬁrst time in many years at Stourbridge a big competitive squad at the club which has not only made selection decisions sometimes a tricky one but ultimately challenges the players to play at a consistently high level week in week out as they know that someone is always looking to take that shirt off their back.

We look forward to rising to the challenge of Hinckley today who sit a few places below us in the league but appear to be on a good run of form. Stourton Park must remain a fortress for us this season.

Supported by The Crown, Oldswinford
Posted by Stourbridge Rugby at 00:31 No comments:

Welcome to the Stourbridge Rugby BLOG! 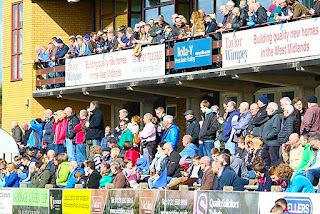 Stourbridge Rugby Football Club was established in 1876 and has a distinguished history as one of the leading community rugby clubs in the West Midlands.

Stourbridge RFC also has a thriving Mini, Junior and Girls Section, with over 250 children from the ages of 4 to 16 enjoying the game every Sunday morning.

Membership of the Club totals over 500 members, making it an important part of the Stourbridge community and beyond.

Sponsorship at Stourbridge offers businesses an ideal opportunity to support an active and thriving community club with National coverage.

There's more news to follow, so keep watching this space!